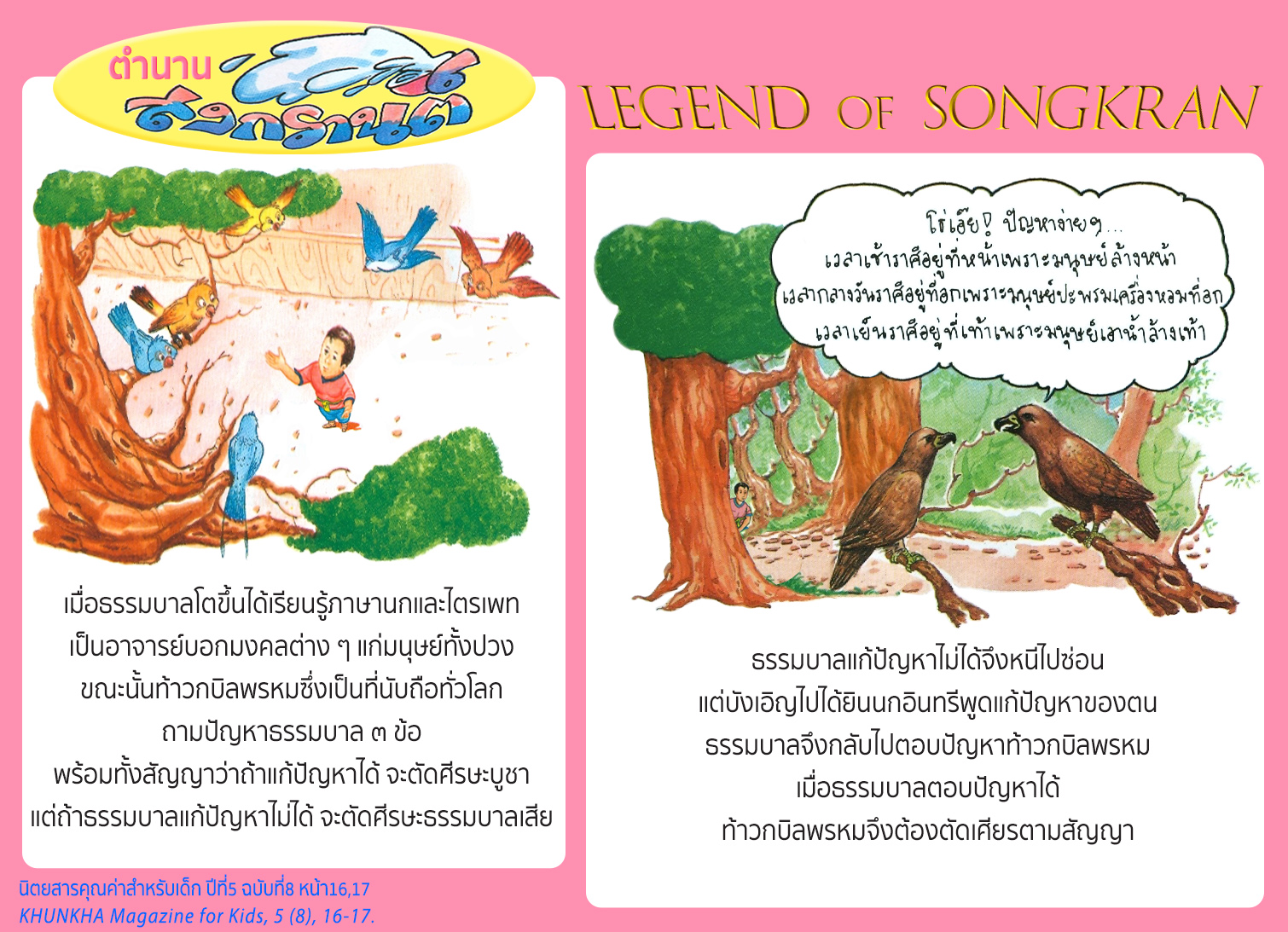 April 13 is the traditional Thai New Year’s Day called Songkran Day. The celebration throughout the country occurs over a three-day period from April 13-15.

Songkran festival is well-known for its water festival which is mostly celebrated by young people splashing water on each other.

Ii is also a festival of unity, most people usually return home to their loved ones and elders. One of important parts of Songkran tradition is a way to show respect to the elderly by pouring water over the palms of elders’ hands.

Regarding the origin of this joyous festival, legend has it that there was a challenge between God Kabilla Phrom and a young man named Thammabal.

There was once a wealthy man who lived next to a drinker’s house. For a long time, this wealthy man had no kids.

It happened one day during the conversation of the wealthy man and the drinker. The drinker insulted the wealthy man, “You have no heirs because you are a man of sin. It’s useless for being rich because after you die, no one will inherit your wealth.”

The wealth man was ashamed then he planned to perform rituals to ask for a kid from God Indra. Not so long, his wife was pregnant.

That year he got a son named Thammabal.

When this boy grew up, he could understand the language of birds. At that time, God Kabilla Phrom who was worshipped by people around the world wanted to challenge Thammabal with a three-part riddle.

God Kabilla Phrom made a bet to cut off his own head to perform a ceremonial salute to Thammabal, if he could solve this riddle. But Thammabal had to sacrifice his head unless he was able to get the right answer.

At first, Thammabal could not think of the answer of such difficult riddle so he hid himself under the big tree. By chance, he overheard two eagles talking to each other about that life and death riddle.

As soon as the eagle finished talking, Thammabal who understood birds’ language, immediately went to Kabilla Phrom to answer that riddle.

Since Thammabal could get the right answer, Kabilla Phrom had to kept his promise by offering his own head.

In order to save the world from the occurrence of natural disasters, Kabilla Phrom instructed his seven daughters to place his head on a tray and keep it in a cave on Mount Kailas.

Thus, at the beginning of each year one of Kabilla Phrom’s seven daughters (representing each day of the week) would take turns to bring out their father’s head and carry it in procession around the base of Mount Meru before placing it back in a cave on Mount Kailas with many offerings. This celebration is known as Songkran.