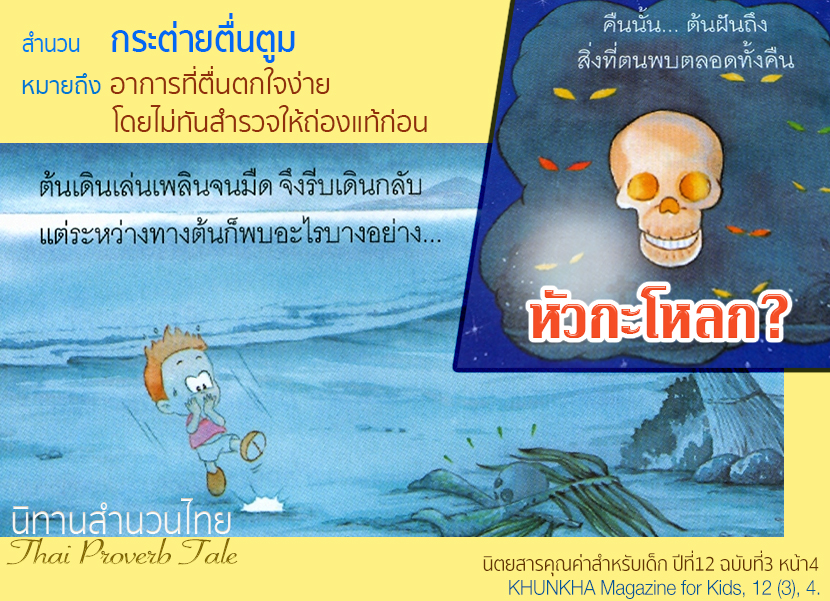 Sometimes what you think is not what it really is. Especially after running into something and then making a conclusion without careful thought, there is a high chance you think it wrong.

“The Skull” is Thai proverb tale about a little boy named “Ton”. He is a good example for this Thai proverb “Greatly exaggerated startle without careful thought”

Is it possible this little boy involved with the horrible skull? Let’s find out!

It was summer vacation. On Saturday afternoon, dad drove “Ton”, a seven-year-old boy, and his mom to stay at the beach house. Their little beach house was very close to the sea. Ton came here with his parents several times. He really loved to walk on the white soft sand along the shoreline and looked over the rolling waves in the deep blue sea.

At the moment they arrived there, even though it was almost sunset Ton eagerly asked his mom, “Mom, may I please go to walk along the beach for a while?”

“Umm! Yeah, but don’t go too far because it’s going to be dark soon.”

Ton happily walked straightforward to the beach. He looked up into the cloudless sky, smelt the salty air and listened to the sound of the crashing waves. He totally forgot his mom’s warning and did not notice that it was already dark.

When the boy looked along the beach, he could see no one. He quickly turned around and walked back home as fast as he could. Quite by accident while walking and glancing at the palm trees in the distance, he saw something very strange!

On the ground right under one of those palm trees, there were a few dried palm leaves. Among them there was something kind of round-shaped with dark brown color. Just taking a quick glance, he could see two holes like the eye sockets. He mumbled in a trembling voice while his body was shaking, “It… it’s a human skull!”

The boy was really freaking out and the only thing he could think of was running away super-fast.

Fortunately, Ton arrived home safely. He did not want to tell his parents about what had happened. That night he went to bed right after dinner.

At midnight, he was still awake. Because even with his eyes closed he could still see the horrible skull. “Oh, it was so scary! I shouldn’t have been there. I’d rather tell mom.” In the morning, Ton told his mom the whole story about the horrible skull underneath the palm tree.

Soon after that, the boy and his mom walked to that palm tree together. It was a beautiful sunny day. Underneath that palm tree, they saw some dried leaves. Among them there was a dark brown whole dried coconut with holes on top of the coconut shell. It really looked like a human skull!

“Ton, please take a look carefully. What you thought was a skull is only a dried coconut. You are greatly exaggerated startled without careful thought,” his mom finally helped him figure it out.