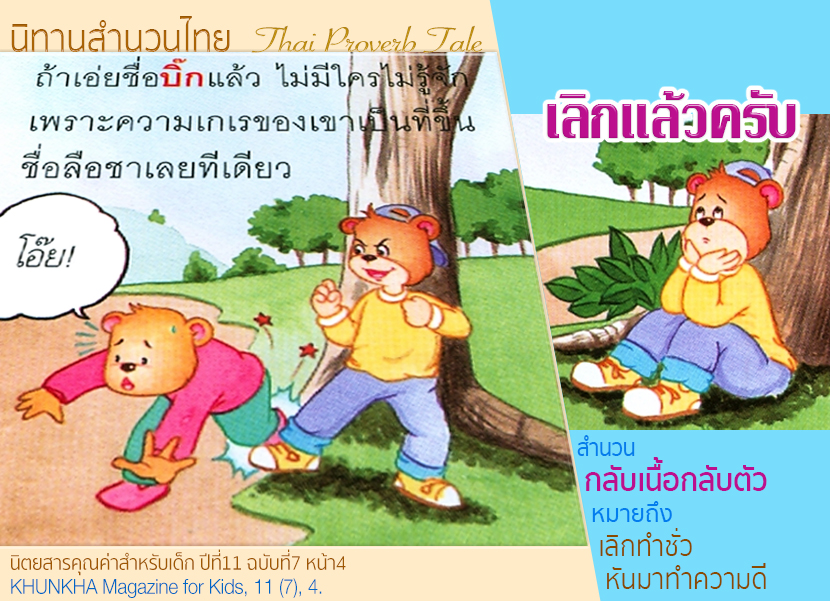 Can “the naughtiest kid ever” turn his life around?

You can find out from this Thai proverb tale, Changing for Good.

When talking about “Big”, no one could deny knowing him. Big was called “the naughtiest kid ever” because he kept doing irritating negative behaviors over and over again.

On weekends, Big had his own way to have fun by playing a trick on his victims, mostly his friends at school, one by one.

Just like this morning, he was hiding behind a big tree waiting for his first victim to come across. Then he would grab the perfect moment to stretch his leg straight out in front of his friend and that made his friend fall down.

“Ouch!” Big’s first victim of the day cried out loud because he was both startled and hurt.

His second victim was Big’s another friend named “A”.

“Aha, that’s A!  He’s coming this way. It must have been fun to play a trick on him,” Big started thinking as soon as he saw A riding a bike directly toward him.

As a result, A was so startled that he lost control of his bike, struck the fence and fell flat on his stomach. “Ouch, it really hurts! I’m afraid my arm’s broken. Somebody, please help me!” A cried for help because after a fall he could not move his arm without pain.

Big became frightened when he saw his friend getting hurt that much. He rushed to his friend, “Hey, just keep calm! I’ll take you back home. Be patient!”

Fortunately, when A’s father brought him to the hospital, the doctor told them A did not break his arm. He needed a cast for a few weeks to have better protection though.

After A’s injury, Big felt bad for what he had done to his friend. He started thinking over and over. Finally, he had it all figured out. No doubt, it was time to turn his life around and no more bad behaviors.

“A, I’m so sorry. It was all my fault made you crash the bike and get hurt. I promise I’ll never do it again. Will you please forgive me?” Big really meant every word he said to A.

“Don’t worry, I forgive you. I hope Big the naughtiest kid ever will disappear forever,” A was also glad to know Big was changing for good.