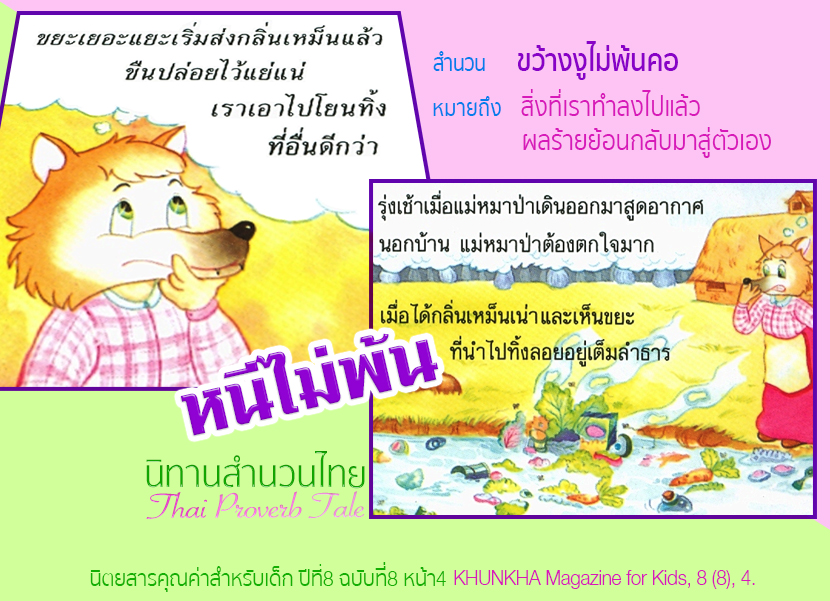 When bad choice was made, the bad consequences followed.

Mrs. Wolf had done something bad so she had to face the inescapable consequences. Let’s read this Thai proverb tale to see what she’d done wrong.

This lovely cottage by the brook belonged to the Wolfs. It was in a small beautiful neighborhood in the forest. The Wolfs had a rather big family, so everyday Mrs. Wolf had to cook quite a few meals for everyone. That resulted in a lot of garbage.

Every night, Mrs. Wolf put the garbage in a big trash bag and took it outside. Within a week no one came to pick up, there was a pile of several big trash bags altogether.

Next morning while Mrs. Wolf was walking outside her house, she noticed something strange. “My goodness, those trash bags smell so bad! Perhaps I can take all of them to throw away somewhere else!” mumbled Mrs. Wolf and tried to think about where to dump those trashes.

Somehow, she got the idea. Mrs. Wolf used her wooden cart to carry all those bags together and walked along the brook side to the north looking for the dumpsite.

“Aha! This is a good place far enough from my house, so that bad smell definitely won’t bother me,” Mrs. Wolf unloaded the trash bags one by one from the cart and put them all together by the brook.

Unfortunately, that late afternoon a very hungry dog came across those bags. Of course, as soon as it smelled something stinky, the starving dog ran forward to scavenge those bags for food. For a moment, the floor around those trash bags was scattered with rotten vegetables and food, empty bottles, shredded up boxes, and food packages that had been ripped to shreds.

In the evening, there was a thunderstorm. The brook rapidly rose because of a very heavy rain. Everything by the brook was carried down, included those trashes. If you were there, you would have seen those floating trashes gradually moved along the brook.

Early next morning, after the storm there was a clear sky. Mrs. Wolf woke up early and walked to the brook for a breath of fresh air. Suddenly she smelled something stinky. And she was so startled at what she saw in the brook.

A large raft of floating garbage covered all over the beautiful brook! Those were the trashes she had just threw away the day before.

“Uh-oh! What happened, how can these trashes be here!”

Because Mrs. Wolf made a sloppy decision to get rid of her trashes. What happened was the inescapable consequences of what she had done.