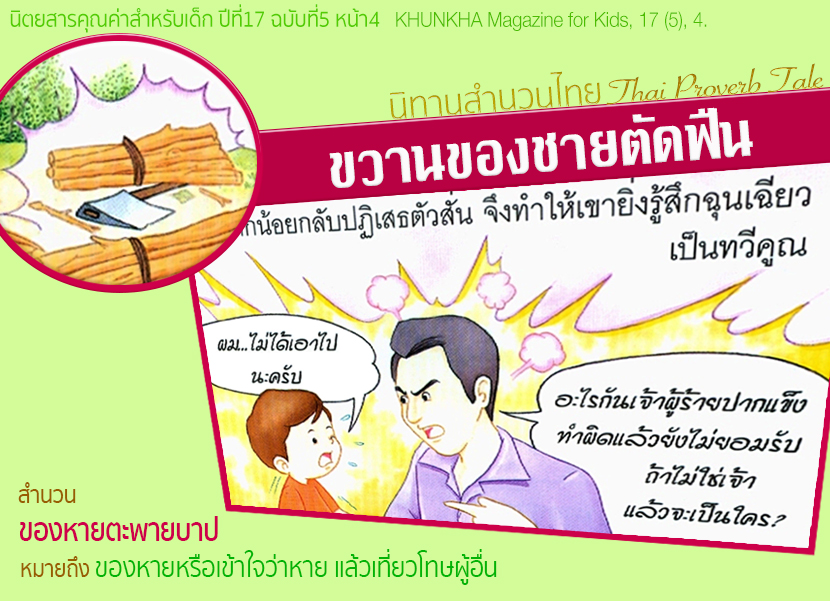 It is much easier to blame someone else rather than yourself when making a mistake. Just like the woodcutter in this Thai proverb tale, The Woodcutter’s Ax, he really did blame others for his problem.

Let’s read the story together so you know more about Thai proverb which has the meaning of “Blaming others for lost items”.

This morning the woodcutter woke up early and walked down to the area beside his house where he worked and stored all firewood before sale. Then he noticed that his favorite ax was gone, “Eh, where would it be? I’ve searched everywhere and it’s still missing. Or…perhaps someone stole it!”

Just a quick thought about the last time using his ax, the woodcutter recognized that there was a boy next door playing around in the open space under his house. “Aha, it must have been that little boy who stole my ax!” the woodcutter really believed the boy was a thief.

The angry woodcutter quickly walked straight toward the boy’s house and yelled out loud once he saw that boy, “You, you stole my ax!”

At that moment, the boy never had any idea what was going on. He was startled and very afraid of the woodcutter when seeing the woodcutter’s anger. He replied in a trembling voice, “No, no I didn’t take it.”

Unfortunately, the boy’s denial made the woodcutter angrier than ever, “You liar! How dare you deny stealing my ax? If it’s not you, who would it be?” Finally, no matter how angry he was, his ax was still missing.

The next morning, the woodcutter walked down from his house to prepare the firewood to sell. While gathering and loading the firewood onto the cart, he suddenly saw the shining white steel of the ax head under a pile of firewood, “Oh, that’s my ax!”

Though the woodcutter was glad at first, he felt guilty later. “I must have left it under the wood pile after splitting wood! Too bad, I have already accused that boy of being a thief. From now on how can I ever face that little boy again?”

If only the woodcutter spent some time thinking about his lost ax before blaming others, this awkward situation would not have happened. So, he got his lesson and hopefully he would stop blaming others for his problems.