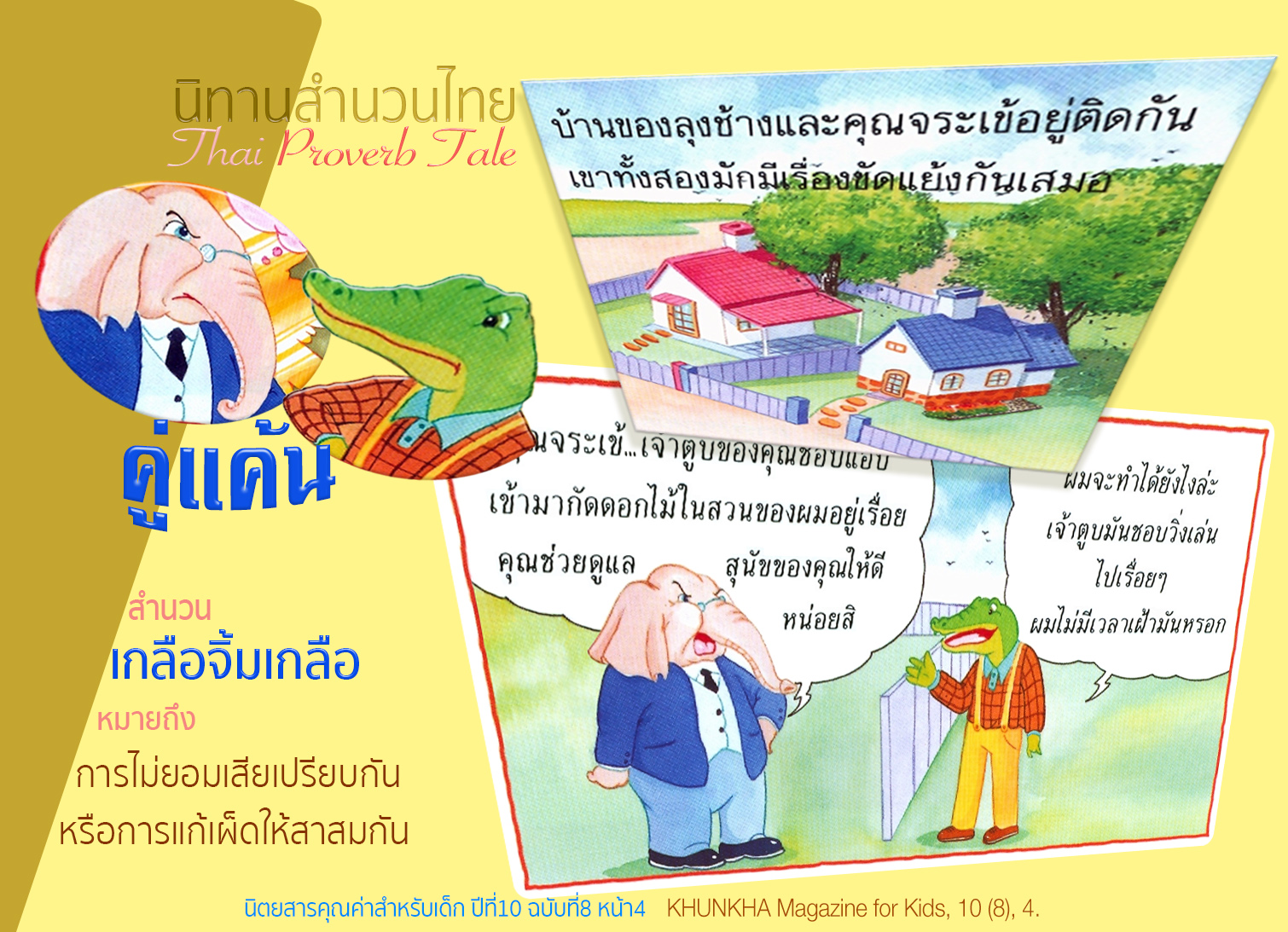 This Thai proverb tale is about two neighbors whose relationship can be described as Thai proverb that means “Two people get revenge against each other”.

It’s not uncommon having not-so-friendly neighbors or even bad neighbors, we’d rather have a good one though. Let’s read “Enemy next Door” to see how these two neighbors took revenge on each other.

Uncle Elephant, aka Uncle E, lived next to Mr. Croc’s house. They had shared fence. Both of them always had different ideas made them quarrel all the time.

Just like this morning when they were at the fence between their houses, Uncle E was so upset. He yelled at Mr. Croc, “Hey, Mr. Croc! Your bullheaded dog always sneaks into my garden and bites my flowers. Why don’t you watch your own dog?”

“Eh! What am I supposed to do? My dog only wants to play. I don’t have time to watch it,” replied Mr. Croc who always hated Uncle E’s gut and then he just walked away.

Mr. Croc’s answer made Uncle E more upset. “Argh! If you say so, I’ll get back at you my way,” mumbled Uncle E while planning to start a revenge.

Next evening, these two neighbors met at their fence again. But this time Mr. Croc was the one who yelled, “Hey, Uncle E! Your quirky dog snuck into my porch and chewed up my shoes. So, what are you going to do about this?”

“Oh! What am I supposed to do? Like your dog, my dog just wanted to play. I also don’t have time to watch it,” Uncle E replied as same as Mr. Croc used to. Sure enough, it was time for Mr. Croc to be upset.

The following morning, Mr. Croc was even more upset when he saw many leaves from Uncle E’s tree fell into his beautiful lawn. “Hey, Uncle E! Fallen leaves from your tree made my lawn dirty. What are you going to do about this?” asked Mr. Croc.

“Oh, it’s natural! Who would forbid it?” replied Uncle E.

A few hours later while Uncle E was walking in his garden, he came upon a huge pile of fallen leaves on his lawn, “Argh! It must have been Mr. Croc who did this to me!”

Uncle E was right because this was the way Mr. Croc got back at him.

When two people get revenge against each other, it’s not a win-win situation. Mostly they end up being all losers.