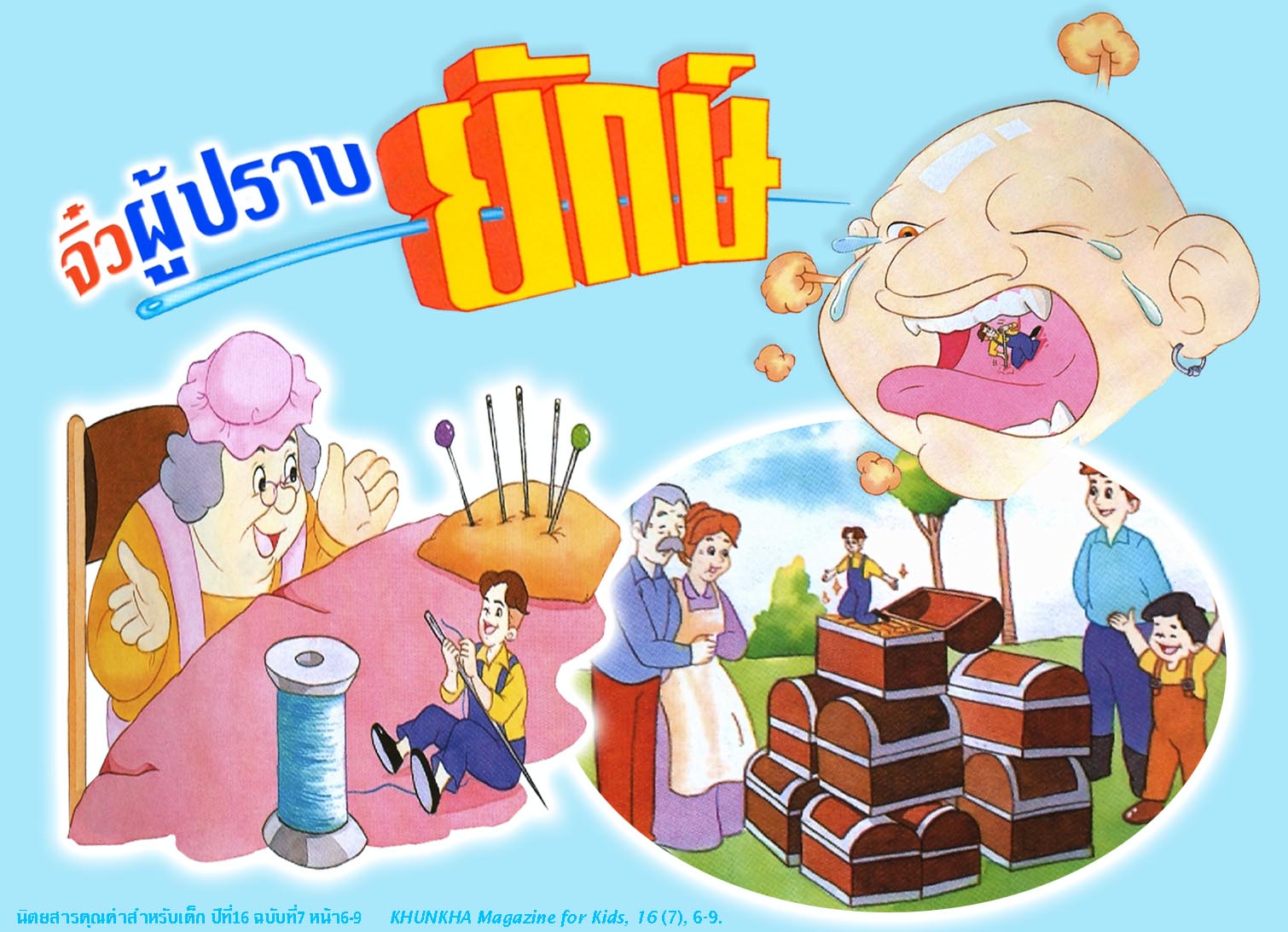 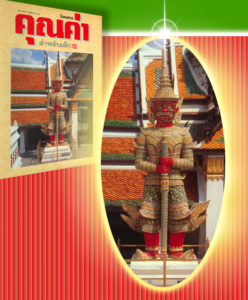 This is the Front Cover of Khunkha Magazine, March 1990.

The red giant in this picture is Suriyaphop. This giant is one of the 12 guardians of the gates in Wat Phra Kaew, one of the most famous temples in Bangkok, Thailand.

Not only the picture of the Thai giant, there is also an interesting tale of a giant here. Please read carefully and you can both enjoy and learn something from Tiny who beat the Giant.

There was once upon a time an old couple living together and had no child. So both of them prayed to the deity for a son or a daughter.

“Please have mercy on us and give us a child. No matter how this child looks and how small this child is, we’ll always give our love.”

Soon the wife got pregnant and gave birth to an adorable baby.

But there was something about this baby different from the others. He was very…very tiny and even smaller than our palm. Everyone called him “Tiny”

However the couple still gave all their love and a very good care to the tiny baby. Tiny grew up to be a happy boy and never felt inferior of being different.

The only thing made Tiny worry was both of his parents getting older everyday. Because of his tiny body, it was impossible for him to help them to work on the farm. Just only plowed the very small size of land it took him almost a whole day.

One day Tiny asked his parents he would go to find more suitable job for himself in the town. So he could earn some money to support them when they were older.

As soon as Tiny arrived at the town, he overheard a disappointing voice from an old lady, “Oh dear, I seem to be too old to do my job.‎ I can’t even thread a needle.”

Tiny hurried to help that old lady. It was very easy for him to thread a needle because the needle is so big when compared to his tiny size.

When the old lady knew Tiny really needed a job she offered him right away, “I’m a dressmaker but I’m too old to work by myself. I really need someone to help me thread a needle. Otherwise I couldn’t sew the dress anymore.”

One day there was a giant coming in the town to attack many people. The king sent many of his soldiers to defend but none could defeat the giant. So the king made an announcement to find volunteers to fight the giant.

Unfortunately no matter how many people tried, nobody could beat the giant. Then Tiny asked permission from the king to fight the giant. But the king just laughed at Tiny when he saw how small Tiny is.

“Ha…ha…are you insane? Even the big guys couldn’t beat the giant, you think can win by your very small body,” said the king.

But Tiny insisted on his intention. So the king allowed and he said, “Um…if you can beat the giant I shall give you 10 boxes of gold as a reward.”

Soon after, Tiny went back to the dressmaker lady and borrowed a fine needle from her to use as his sword. He also brought one piece of fine thread with him.

When arrived at the giant’s cave, Tiny yelled loudly to challenge the giant. Because of his very small body, the giant couldn’t see anyone. “Who are you? Or you’re a ghost, that’s why I can’t see you,” said the giant with the very loud and powerful voice.

“Hey…look down over here!” Tiny shouted back.

The giant laughed out loud when he saw Tiny. “Ha-ha…perhaps the king couldn’t find any brave man so he had to send you instead. Yum…I’m starving! Come on, be my snack!” said the giant.

The giant bent down to pick Tiny up and put him in his mouth. At the same time Tiny hurried to tie one end of the thread at the giant’s tooth and the other end at himself so he wouldn’t fall into the giant’s stomach. Then Tiny gradually climbed down the giant’s throat and used his needle to stab all the way down.

“Ouch…ouch!” the giant shouted in pain. “Please…please stop! I surrender.”

So Tiny forced the giant to meet the king and made a promise not to border his people ever after. Soon after, Tiny quickly climbed up to get out of the giant’s mouth.

The king really wondered how a very small person like Tiny could beat the giant. “Tell me Tiny. How could you beat that giant?” asked the king.

This time Tiny had a chance to tell the king something in his mind, “My inferiority, being a very small person, never stops me from doing something great. I always try to improve myself and turn threats into opportunities.”

It seems like the king admired Tiny’s intelligence and courage. He gave Tiny 10 boxes of gold as his promise. Absolutely, Tiny brought all his reward back to his old parents. With the richest, they no longer worked on their farm. And about Tiny…not only he was recognized as a hero, but also nobody in his town ever laughed at his very small body.